Kochi, the home of Startup Village, Infopark and upcoming Smart City signed a MoU with the US City, Menlo Park. A 3 member delegation led by the Mayor of Menlo Park Catherine Carlton along Mr. Ray Mueller, Menlo Park City Council Member and Mukul Agarwal, Bootup Ventures Managing Partner visited Kochi City as part of the twin city programme.It is the first twin city agreement between Menlo Park and any Indian city, and it aims to create a bridge between Silicon Valley and the emerging Silicon Coast in Kerala.

One of the objectives of the twin city agreement is to promote sharing of talent and ideas in the technology sector, thus boosting employment opportunities in both the countries. The agreement would establish a year of cultural exchange during which the two cities will create a framework to encourage interactions between their citizens. Through this collaboration, Kochi will be able to get to the global stage and emerge as a key player in the telecom-technology sector and also aim to boost Landing Pad, a project supported by the Kerala Government at the Silicon Valley.

The UN-Habitat supported European Union funded SOLUTIONS (Sharing Opportunities for Low carbon Urban transporTatION) is one of the major ongoing project of Cochin City. The project aims to support the exchange on innovative and green urban mobility solutions between cities from Europe, Asia, Latin America and the Mediterranean. The project also focuses on the uptake of innovative and green urban mobility solutions across the world through dialogues and exchanges.

Cochin is one of the take-up cities and has been 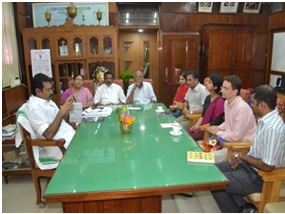 teamed-up with the City of Hangzhou (China) with ICLEI as the take-up Coach. As a next step towards this project, a team led by the Project Manager of SOLUTIONS, Oliver Lah, visited Cochin and interacted with the officials and other stakeholders.  The project is progressing and is coordinated by c-hed for Cochin.

Mosques of Cochin is an invaluable contribution the documents the surviving vernacular mosques, which stand as powerful and visible expressions of Islam’s integration into the culture of Malabar. Mosques of Cochin help in understanding the cultural and social value of the traditional architecture of Kerala. The book documents a rapidly vanishing architecture of the vernacular mosques in Cochin.

As part of the book launch, a detailed discussion on the challenges of maintaining the old mosques in Cochin had been held in association with c-hed. A detailed presentation on the book was made by the author Patricia Tusa Fels.

The entire programme was coordinated by c-hed.

The National Highway stretch from Vytila to Edapally is one of the most frequented public spaces in the State of Kerala. This broad stretch which passes through the heart of the Cochin city also plays an important role in regulating and decongesting the traffic conditions of the Cochin city. The Kochi Municipal Corporation has been receiving many complaints with regard to the poor maintenance of this stretch. It is against this backdrop that the Kochi Municipal Corporation has come forward to clean this stretch and beautify it with flowering plants and maintaining it for a stipulated period as per the specifications and guidelines of the National Highway Authority of India and included the project in Mission Kochi 15-8-15 campaign of the Kochi Municipal Corporation.

The Kochi Municipal Corporation’s ambitious project for city beautification under the Mission Kochi 15-8-15 was inaugurated by the Hon’ble Excise, Ports and Fisheries Minister Shri. K Babu on January 24th, 2015. A stakeholders committee, Kochi Bypass Beautification Society, had been constituted for undertaking the project under the supervision of the Kochi Municipal Corporation. The society has city’s leading businessmen as its members. V-Guard Groups Chairman Shri. Kochouseph Chittilappilly is the Chairman of the Society, Eastern Group Project Director Shri. M.E Mohammed is the Secretary and the Manager of Holiday Inn Shri. P.C. John is the treasurer of the Society. The National Highway Authority of India has given permission to beautify and maintains the stretch for a period of 3 years.

The stakeholders had spent an amount of Rs 1 Crore for the beautification of the stretch in addition to the maintenance cost of Rs 37 Lakh spent by the Kochi Municipal Corporation. 20000 saplings were planted on the central median on 4.6 km of the 6 km long stretch. The side medians along with the service roads would also be beautified in future as the 2nd phase of the beautification project.

The project is being coordinated by the Centre for Heritage, Environment  and Development (c-hed) for the Kochi Municipal Corporation.