The whole “sensible” world is thinking loudly about ways and means to mitigate climate change and its impact. One of the major causes of global warming and subsequent climate change is carbon emission resulting from fossil fuel led transportation. Transit-oriented development, E-mobility, non-motorized transport, public transport facilities, pedestrianization etc. are certain mitigation strategies that urban and rural centers in the world adopt to reduce the use of fossil fuel. It is scientifically proven that pedestrian oriented population in urban and rural centers can help minimize carbon emissions to a large extent. It is against this backdrop that countries across the globe especially their urban centers started moving towards building and creating more of pedestrian friendly landscapes and streets-capes.
‘Pedestrian first’ and ‘pedestrian friendly’ are certain terms or cliché that we very often use here in India too, especially in the urban context. But in reality, the Indian cities are not at all in harmony with the above; rather they are more of ‘motor-vehicle friendly’ giving damn about ‘carbon foot print’ or reducing emissions. However, off late, efforts are focused on giving a major makeover to this image and many cities in India are seriously working towards embracing a pedestrian friendly streets cape as part of mitigation and beautification measures.
In this context, the city of Kochi has been witnessing a real transformation and a major overhaul in pedestrianizing the city is underway, thanks to the works of Kochi Metro Rail Ltd., Cochin Smart City Mission Ltd., Kochi Municipal Corporation, Greater Cochin Development Authority and other such agencies. The ‘citizen networks’ as pressure groups also play a pivotal role in expediting the process of this transformation. The inspiring works of the Oak Ridge National University from the U.S.A. and International Centre for Local Environmental Initiatives – New Delhi, on the impact of Climate change remain the main background research on climate change and Kochi.
However, the biggest challenge that these newly developed public spaces faces is that of encroachment by street vendors, pop-up shops, advertisers, vehicles and other such impediments, cutting off the path between, obstructing the way and discouraging the people from using them. There are classic examples from Kochi where such beautifully developed spaces are encroached upon in no time by these elements with active connivance from certain ‘power centers and vested interests’. One of the most beautifully pedestrianized pathways, Main Avenue, Panampilly Nagar (Shihab Thangal road) up to Panampilly Nagar South end has been an instant success and is one of the most active open spaces in the city. To our dismay, a real good stretch of this place is now occupied by street vendors and pop-up shops with near-to permanent edifices especially in areas close to the regional passport office. Same is the case with the pedestrianized pathway near Subhash Chandra Bose Park, Children’s Park, Marine Drive and General Hospital. The pedestrian pathway in M.G road also faces the onslaught of such encroachment including that of hoardings and flux-boards making the area highly ‘polluted visually’ as well. It is very distressing to see these encroachments and visual pollution disseminating the whole face of the city. The tragedy is that when the path becomes difficult to traverse, people opt to take roads and resort to vehicles for traversing even the shorter distances, thus defeating the very purpose. These encroachers are certainly not people from impoverished sections of the society seeking self-employment but on the contrary they are part of a ‘big mafia like nexus’.
I don’t think this is an issue solely affecting Kochi but an issue that almost all Indian urban centres face. It is high time that we had really strived to keep our cities pedestrian friendly and also visually appealing not only for their aesthetic value but also for the larger cause of fighting climate change impact. Where do we begin this from? We need to revisit the land-use pattern of the urban centres for sure and need to ensure that there are enough open and public spaces and proper pedestrian pathways connecting them.
We have embarked on a mission to ‘rebuild the state’ in the aftermath of the worst fury of nature. We are gradually re-building the state to a more sustainable future. It is imperative that we should give utmost importance to re-building our cities too so as to ensure a sustainable future for our urban centres as well. In this pursuit, a small proper pedestrian pathway also gathers immense significance. It is time that we had realized the relevance of such small but significant aspect of our urban living. 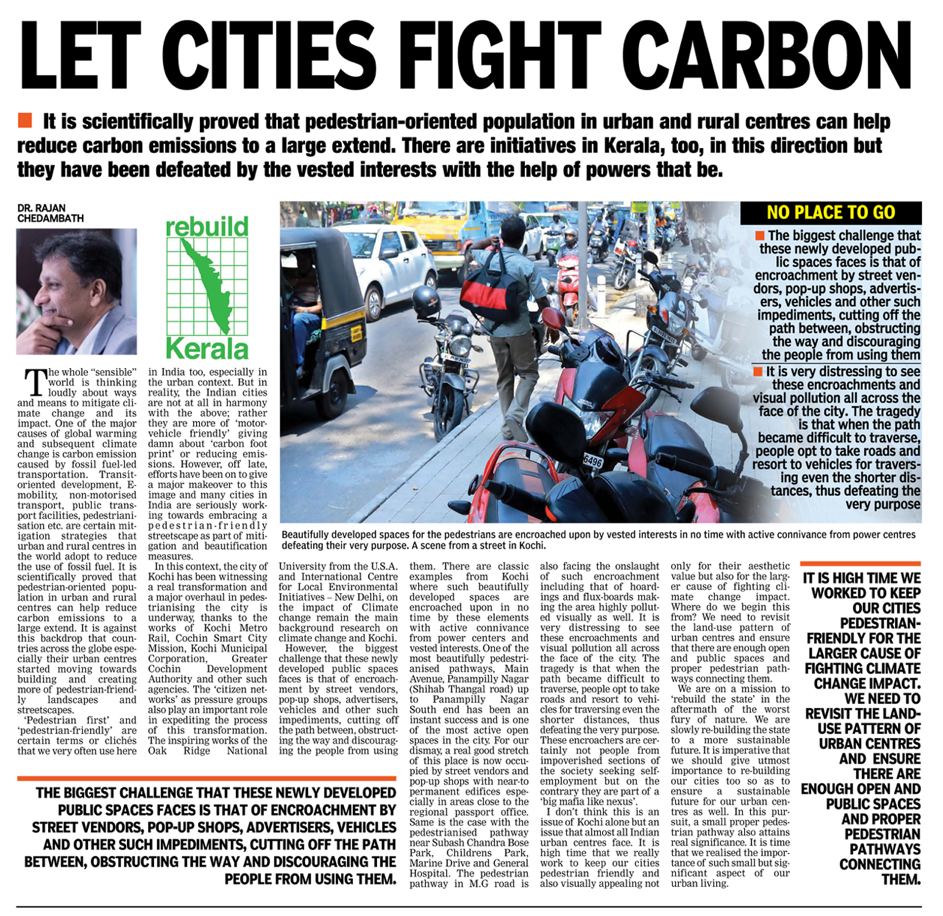